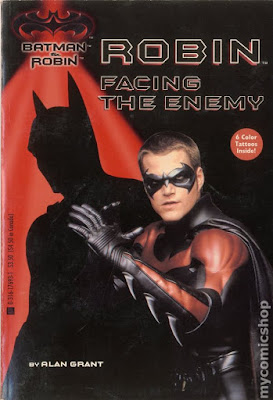 One of the cool (pun not intended) bits of spin off merchandise for Batman & Robin were the two novels Robin: Facing the Enemy and Batgirl: To Dare the Darkness that gave us a glimpse of what happens before and after the movie.

Robin: Facing the Enemy was written by Scottish writer Alan Grant who was a prolific writer at DC. During the 90s he wrote almost every issue of the Batman: Shadow of the Bat title (which lasted 96 issues!).

The story picks up shortly after the events of Batman Forever and sees Robin fall out with Batman (*groan* again) and leave Wayne Manor to live in Gotham City. He gets a job at a diner and ends up having to take down a wannabe villain who rather unimaginatively dubs himself " The Enemy".

It's a fun, brisk story (98 pages) that reminds me of the Nightwing comics of the early 00s. If you want to give it a read, here's a link to a pdf:-