Book: Batgirl To Dare the Darkness by Doug Moench 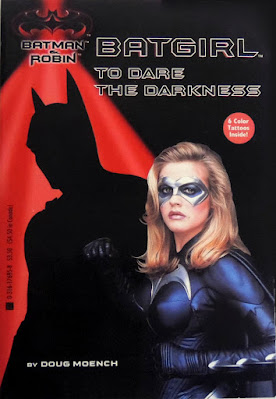 Following on from the previous post I also have a scanned pdf of Doug Moench's tie in novel Batgirl: To Dare the Darkness.
For those who aren't aware Doug, like Alan Grant, was a writer on the DC comics Batman titles throughout the 80s and 90s. Together with Chuck Dixon and Graham Nolan he is credited with creating the character of Bane (I wonder what he thought of the film's loose interpretation of the character) and also wrote many classic stories including big chunks of the Knightfall saga and the popular Elseworlds story Batman & Dracula: Red Rain.
The story picks up after the events of the Batman & Robin movie and sees Barbara Wilson leave Batman and Robin and set up on her own in Gotham City feeling that she isn't needed or appreciated by the dynamic duo. She considers leaving the Batgirl persona behind (much like Robin did in Facing the Enemy) before reaffirming her vigilante commitments and going up against Black Mask (another character Doug created) and the False Face Society.